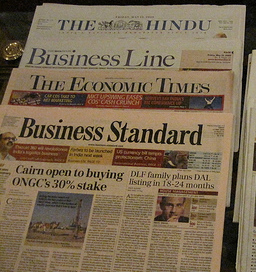 NEW DELHI, August 11 – ECONOMIC TIMES – Piramal Healthcare has decided to buy 5.5% stake in Vodafone Essar for $640 million. Due to Piramal's purchase Vodafone would be at convenience to meet regulatory requirements, which states that foreign companies can only hold up to 74% in Indian telecom firms. – BUSINESS STANDARD – Indian passenger car sales declined by 16% this year due to few reasons like hike in interest rates, increase in fuel prices, etc. has affected the consumer sentiment negatively. Exports of passenger cars estimated growth is about 40.83 % in July due to an increase in demand from non-European nations. - BUSINESS STANDARD – Indian healthcare major Fortis is going to purchase 65 % stake in Vietnam’s Hoan My Medical Corporation (HMC) for $64 million. According to the group chairman Malvinder Mohan Singh this is an important step for Fortis Healthcare International to establish its presence in one of Asia’s fastest growing regions. - FINANCIAL EXPRESS – Due to global shortage of marine products Indian seafood sector has got the opportunity to grow in spite of a slowdown in the developed markets. Export earnings from seafood are expected to touch $4 billion by the end of 2012. Leena Nair, Chairman of Marine Products Export Development Authority (MPEDA) said that the increased production of Vannamei shrimp, increase in infrastructure for production of value added items and the regaining pace of Japanese market after tsunami would definitely help India to achieve the target. Increased production of Vannamei shrimp, black tiger shrimp and better price range for major items like cuttle fish, shrimp and squid helped India gain the high export turn over - FINANCIAL EXPRESS – Bharat Forge has decided to expand its horizons buy making its entry into the Latin American and Asian markets and for starting Brazil is being considered as the target market for now, since it is as important as Indian market. Bharat Forge has strong presence in China and in the long run there could be benefits for the Free Trade Agreement (FTA).