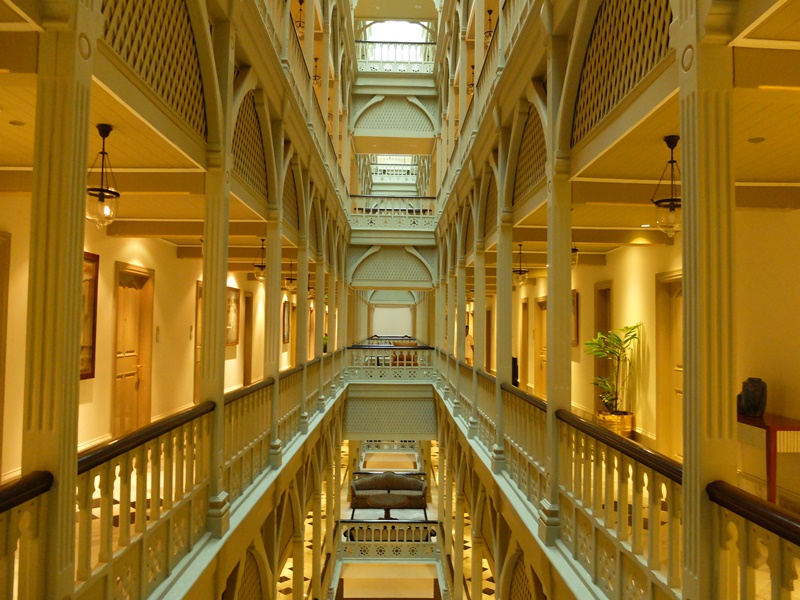 Luxury hotel at the heart of MumbaiAs the planners of the Indian economy agreed to open the gates to the international community for investments over a decade ago, the business environment in India began to intensify. It witnessed a plethora of foreign funds being injected into its economy, predominantly in the IT sector. The arrival of foreign players had a significant effect on India. First, it increased the arrival of foreign tourists which in turn, encouraged the rise of hotels. In the recent years, India has witnessed the birth of several luxury hotels. More recently, mid range or budget hotels have made their presence felt in India.

Though there are several players, domestic and foreign, operating in the Indian market, the time is ideal for the various Thai Hotels to expand their business in the Indian market. There are various factors which make the Indian hotel sector a viable option for investments. First, India has witnessed a steady increase of foreign tourist over the years due to the depreciation of the Rupee. Then there is the diverse portfolio which India offers to its foreign tourists, such as cruises, adventure, medical, wellness, sports, MICE, eco-tourism, film, rural and religious tourism[1].

In a recent survey, Lonely Planet had ranked India as the fourth most preferred travel destination selecting the country among the top five destinations from 167 countries[2]. Furthermore, United Nations World Tourism Organization (UNWTO) ranks India 42nd in the rankings for foreign tourist arrivals. The organization goes on further to estimate that the travel and tourism industry in India will grow by 8% per annum between 2008 and 2016. Foreign exchange earnings from tourism are likely to show annualized growth of 14% during the same period[3].

Second, due to the fall of the Rupee, Indians chose to travel within the country rather than abroad. Furthermore, there has been rise in the per capita income levels which has enabled the Indian population especially the middle class to afford their stay in hotels (mid range to luxury).

The Associated Chambers of Commerce in India (ASSOCHAM) had conducted a survey on India's tourism sector which showed that in terms of Foreign Tourist Arrival (FTA), the States of Maharashtra, Tamil Nadu, Delhi, Uttar Pradesh and Rajasthan were the most preferred destinations. Whereas, domestic tourists preferred to travel to Andhra Pradesh, Tamil Nadu, Uttar Pradesh, Karnataka and Maharashtra[4].

Third, is the role played by the incumbent government led by Prime Minister Modi. It has recognized the potential of the hotel industry and hence, in order to usher in more investments, it has introduced favorable FDI policies.

· 100% FDI is allowed under the automatic route in tourism and hospitality, subject to applicable regulations and laws[5].

· 100% FDI allowed in tourism construction projects, including the development of hotels, resorts and recreational facilities[6].

Furthermore, the Modi government has been undertaking various measures to reignite the Indian economy which had slowed down in the recent years. The government has undertaken various measures to attract investments and in this regard has initiated the improvement of infrastructure like airports, highways, ports and railways. This will act as a catalyst not only to attract investors but foreign tourists as well.

Various global firms have recognized the potential of the Indian market and are planning to seize the opportunities either through Joint Ventures (JVs) or direct participation. To highlight a few examples, Hotel groups like Marriott, Hyatt, Intercontinental, Accor, Carlson-Rezidor, Starwood, Jumeirah have signed several alliances with local investors to set up a wide variety of properties under hotels and resorts. These new properties will range from mid-scale to luxury segments. For instance, Marriott has expressed its desire to establish 100 operational hotels in the next six years from the 24 operational hotels it has now. Then there is the Mid-segment and upscale brands which are set to witness the maximum traction.

Global brands such as Holiday Inn, Fairfield by Marriott, Four Points by Sheraton, Country Inn and Suites, Double Tree by Hilton are working on their respective blueprints to make further in-roads into India[7]. Apart from these international recognized brands, there are several private investors in US which are looking into the Indian market. Alkesh Patel, chairman of the Asian American Hotel Owners Association (AAHOA) of America was quoted by the Economic Times stating, "Hospitality is where our members see the biggest value when making investments in India. For us, it will be very easy to replicate the business model that we have followed successfully in America for so many years. There is a huge requirement of rooms in India and the budget hotel model that we are looking at is different from the ones already there in India. For us budget properties mean quality hotels which are safe, secure and clean and the opportunity in India, especially smaller cities, is huge"[8].

Witnessing the rise of the interest among the global hotel brands to expand their operations in India, Price WaterHouse Coopers (PWC) had constructed a report identifying the cities and the categories of hotels which would be best suited for the Indian market. The report was constructed by conducting a survey among CEOs of leading Hotel Brands.

First, the survey identified Tier I cities, primarily Mumbai and Delhi, to be the most preferred locations for expansion. However, more than one-third of the participants did indicate a willingness to invest in Tier II towns to capitalize on the growth of domestic travel[9]. 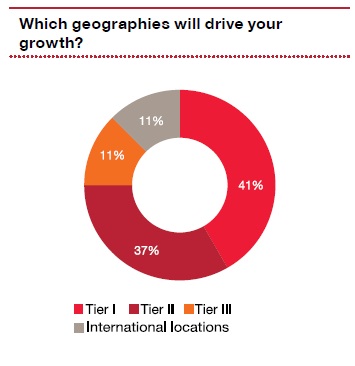 Then the survey took the opinion of the participants regarding the category of hotel which would receive the maximum investments. More than 85% of the participants stated that the mid-market and budget segments would be the ideal destinations for investments. The report went on to state that, for premium and luxury segments, the primary source of investments would stem from players already operating in that segment[10]. 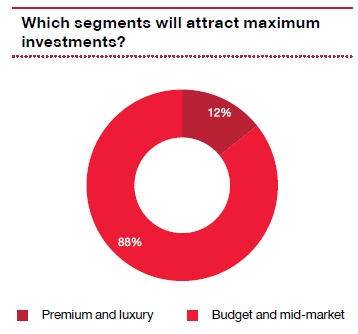 Mr. Vilas Pawar, CEO of Choice Hotels India state that, "Budget-economy hotels is a segment which is showing a significant increase in spending on travel and vacations. The growing awareness among travelers for well-maintained budget hotels and the industry insiders foretell a positive graph. The next 10 years will see an exponential growth in the mid scale segment of hotels across the country. From the guest perspective, it is going to be a buyers market over a sellers market. All in all, a good time for the consumer[11]".

Though the Indian hotel sector radiates positive traits, there are several challenges which are faced by the hotel owners in India. These obstacles were adequately highlighted by HVS, a global consulting firm.

It stated that the most challenging part of launching a hotel in India is the process of land acquisition and receiving the clearances from the government. Then the report identifies the lack of infrastructure as another severe obstacle. For instance, due to the lack of proper roadways, the shipments of goods take considerable time. Hence, it delays the construction of the premises which in turn leads to high maintenance costs. Finally, the report points towards the limited pool of talent as another source of hindrance. There are a few national institutions which produce highly quailed individuals in the field of hotel management. However, most of these candidates are either consumed by luxury hotels or they move abroad. Hence, it becomes difficult for the budget hotels to recruit the qualified Indian nationals which often lead them to hire foreigners, leading to higher expenditure.

However, the interested Thai investor should not be too concerned about these challenges as Prime Minister Modi has already initiated measures to improve India's infrastructure. Furthermore, national schemes like Skill India have been launched to nature the population.

Nevertheless, land issue still remains a cumbersome process. Though a Land Bill has been introduced in the parliament to make the process of land acquisition smoother, it has still not be approved. Therefore, under these circumstances, it is advisable for Thai investors to expand their business through Joint Ventures.

[7] Business Standard: Investments in hotels more robust than ever